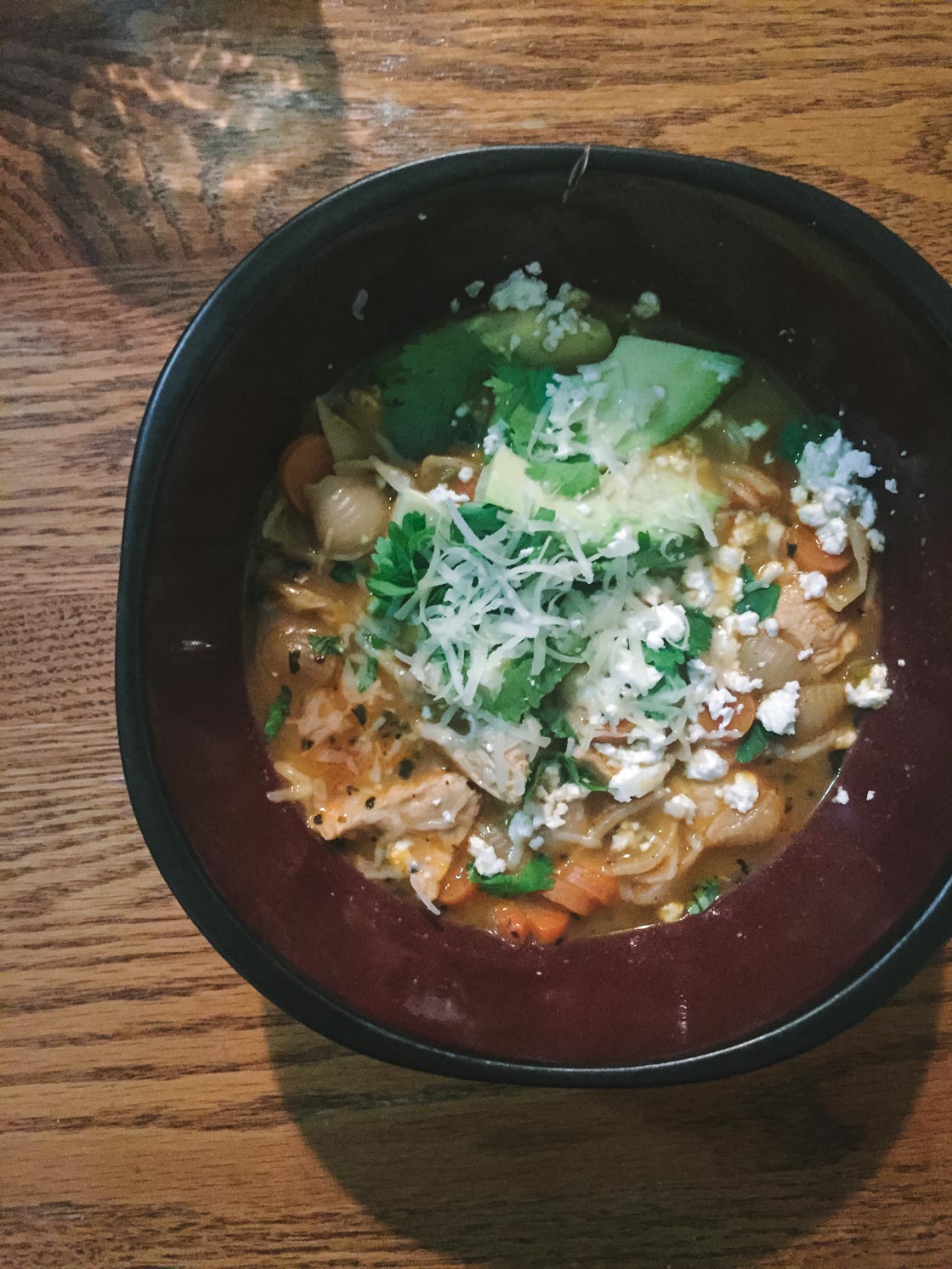 Just a quick post here today (with a quick photo to match — because obviously eating this soup was much more important than taking pictures!)

Back when I lived in rural Arkansas, there was one good restaurant in town — a Mexican restaurant called El Rio Lindo. I only ever ordered one of two things there: chicken tacos, or chicken tortilla soup. The soup wasn’t even on their menu, but it was legendary for it’s deliciousness. And any time anyone mentioned feeling sick, they were immediately prescribed a bowl of chicken tortilla soup.

Since I can’t have Rio’s soup anymore, I decided I must make my own. Plus, it actually felt like fall here in Texas last week! Unfortunately, it was the nasty kind of fall weather — cold & rainy — but whatever. It was soup weather, so I was going to have soup.

Eating soup at any restaurant now is out of the question for me, since inevitably it’s full of garlic & onion (and a stomachache — definitely not the desired result when eating soup). Fortunately, I found this chicken broth that doesn’t have any low FODMAP ingredients! And luckily for me and for you, this soup is incredibly easy & quick to make! Well I mean, if you wanted to, you could cook it for a long time and I’m sure it would taste even better. Or, you can throw everything in a pot until the chicken and pasta are cooked, declare it done, and devour it. Just saying…

So what are we waiting for? Let’s eat some soup!

I didn’t actually measure anything when I made the recipe, so take the amounts below as guidelines. Taste the soup broth throughout the process and adjust the seasonings accordingly. Most of the time, if the broth tastes too bland, it just needs a few more shakes of salt to bring out all the flavors. I once read the ingredient list of every soup broth concentrate in Whole Foods, and managed to find this Better than Bouillon Kosher chicken base that doesn’t have any garlic or onion! It lasts forever too. Highly recommend. But if you don’t have any broth, never fear. Just increase the amounts of seasonings slightly and you should be good. If you want to, you can cook the chicken separately before putting it in the soup, shredding it if you like. In the interest of getting this soup into my mouth as fast as possible, I just cut it into cubes and dropped it in! This served 2 people for dinner, with enough leftovers for both of us to eat it for lunch the next day (although I did add in some leftover sausage too), but it’s easily scaled for more if you need! 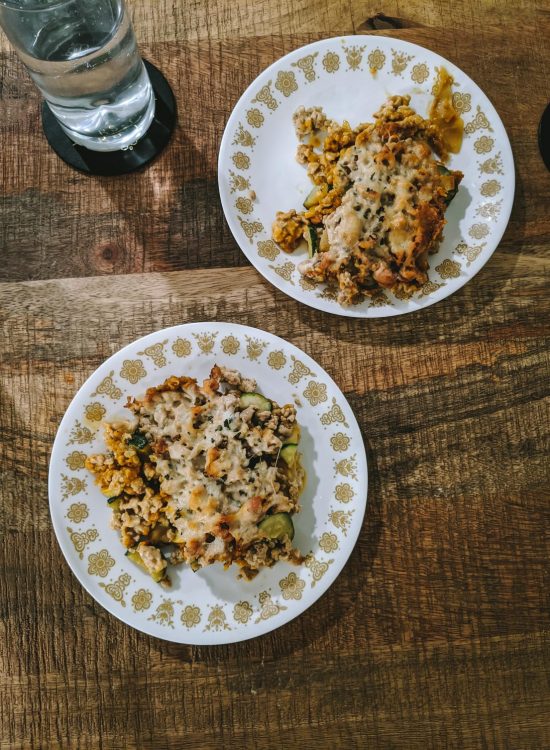 Lasagna is such a delicious, easy meal — but traditional lasagna is made with ricotta cheese and lots of garlic, which are decidedly NOT low FODMAP. Never fear though! This recipe is here to your rescue… 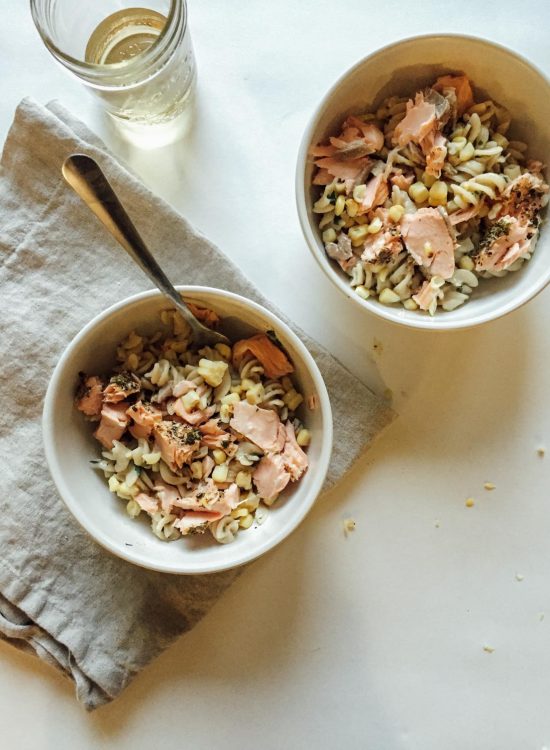 Enter the perfect springtime dish. Picture this: you’re sipping a nice glass of white wine, the weather is finally that perfect temperature where it’s warm but not too hot yet, you’re on a balcony somewhere, and you have a big bowl of this pasta in front of you. Yes? Can you be on board with this? Thought so. 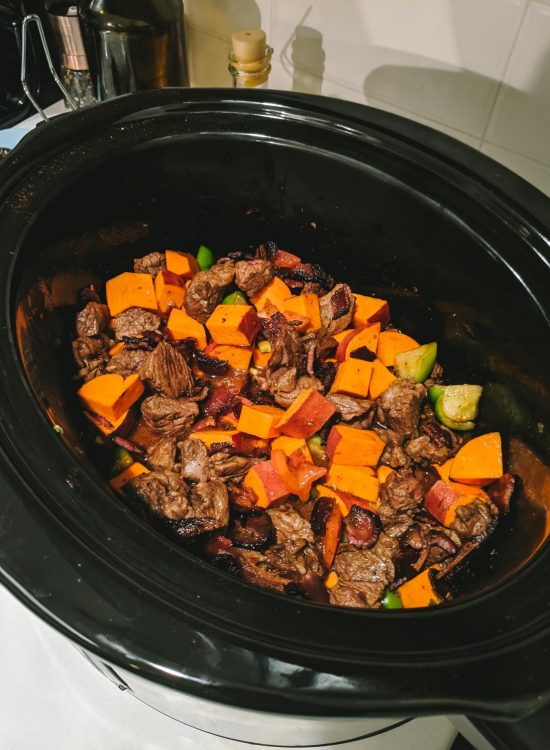 Hello and welcome to this super easy crockpot beef braise recipe! This braise is perfect for meal prep, or when you want to do a little work and 8 hours later get a delicious meal (so... always?).   I have...