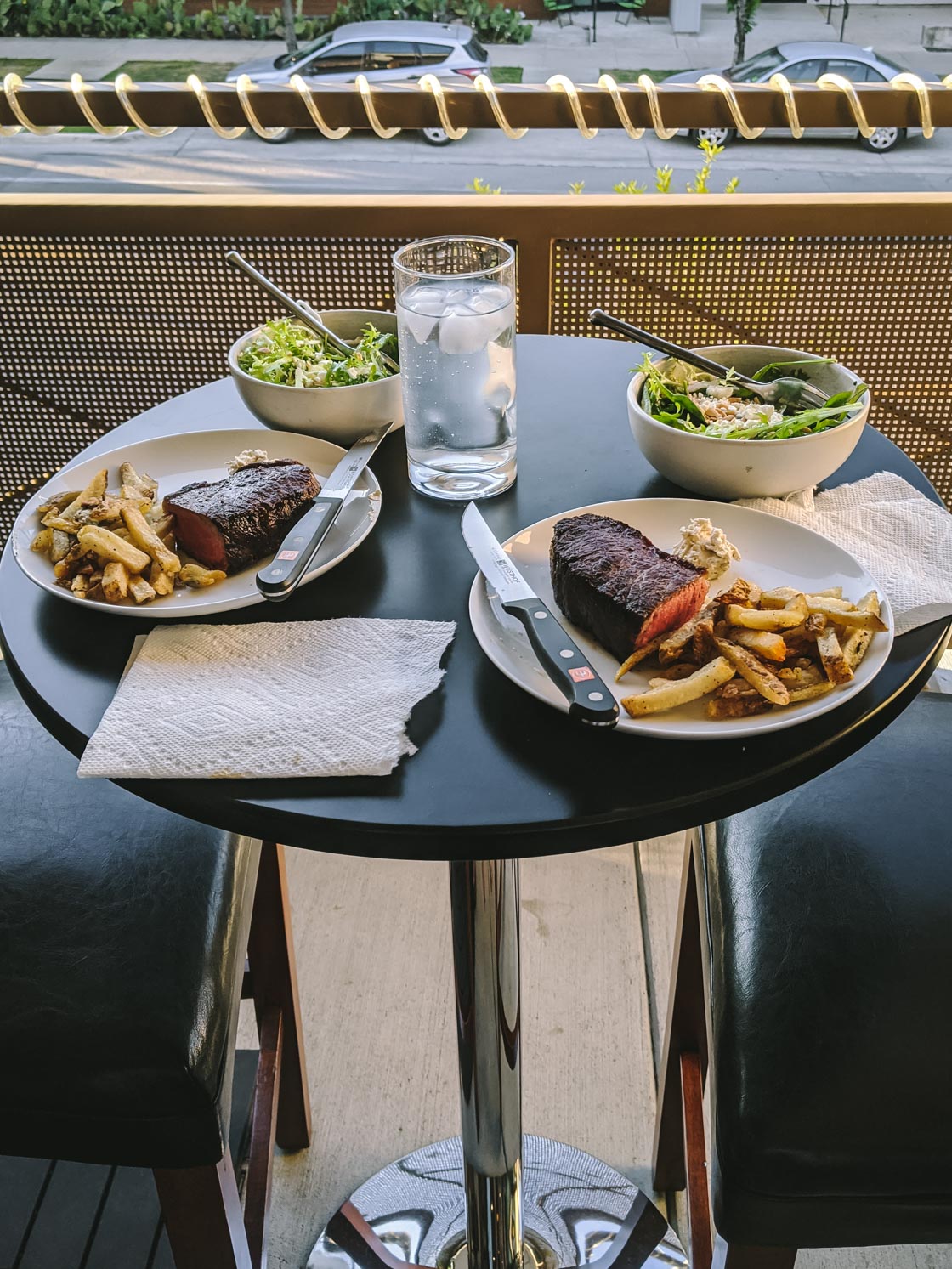 Eating healthy meals can seem time-consuming, expensive, complicated, and all around intimidating. I know I’ve probably added to that perception with recipes for pizza that take two days to make, homemade pasta, and homemade granola, plus my constant shopping at Whole Foods (you try living across the street from it for five years, k? 😅).

But the truth is that 95% of what I eat is simple and easy to make (or put together / find, in the case of eating out or ordering in)! I don’t usually post about it because it’s not all that exciting… but in this case I guess boring is actually a good thing. 😜

And once you know the formula, you too can be eating healthy, balanced, delicious meals anytime and anywhere. You just need to know what to look for!

How do you konw if something is a protein or a carb? Well, I think most things are self-explanatory (and. the below examples will help too), but there are some foods that are tricky — like what about fries? Ice cream? Peanut butter? The easiest way if you’re unsure is to Google “[food] nutrition” and you should get a little blurb with nutrition facts for a serving of that food. (It’s not always 100% accurate, but for our purposes it’ll do.)

So for “peanut butter nutrition” we can see that 2 tablespoons has 16g fat, 6g carbs, and 8g protein. Since peanut butter is the highest in fat, we’d consider that a fat. But you also know now that peanut butter does have some carbs and protein. 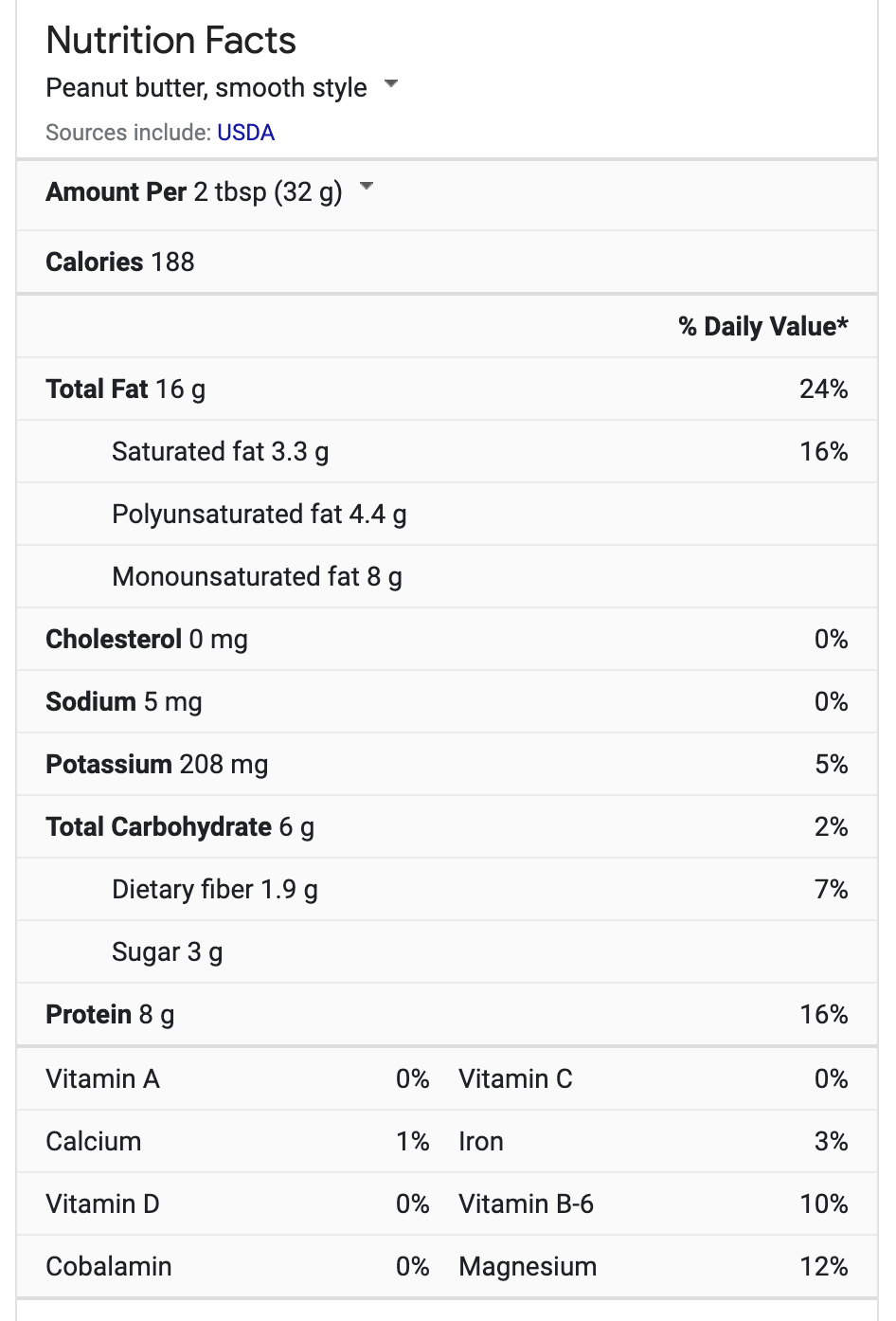 A quick note on “carbs”: When we hear “carbs” mostly we think of things like bread and pasta, which are definitely carbs, but often we forget that fruits and veggies are also mostly carbs. So why put them in a different category?

Let’s look at an example. I, a moderatly active woman, currently eat just under 200g of carbs a day. For simplicity’s sake, let’s say that after snacks, I eat an average of 50g of carbs per meal. In one sitting, that would be over TWELVE CUPS of broccoli. Or, over 14 cups of zucchini, 6 cups of green beans, or 4 cups of strawberries. On the other hand, I could get that in about one cup of rice or pasta — which I think we all agree is a much more reasonable and appealing amount.

Fruits & veggies DO contain important nutrients that you wouldn’t get in rice or pasta though, so it’s important to eat them! So in the formula, “carbs” does refer to things like rice, bread, or pasta that will get you more bang for your buck in the carbohydrate department.

Ok. Let’s take a look at some examples of the formula in action. 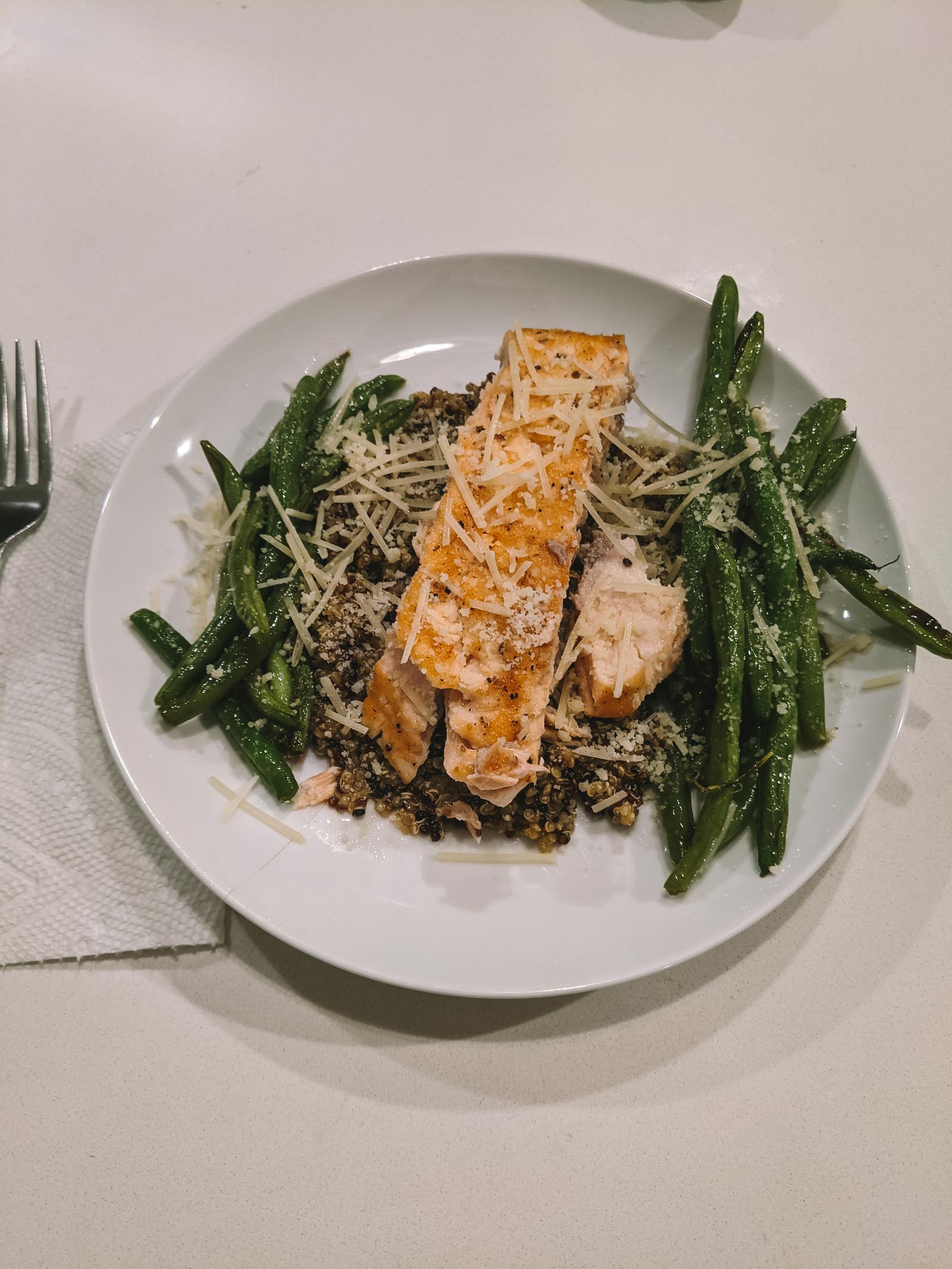 A staple weekday meal around here, and an easy example of the formula. It’d be super easy to swap any one of these things out (chicken instead of salmon, rice instead of quinoa) and still get an easy and tasty meal. 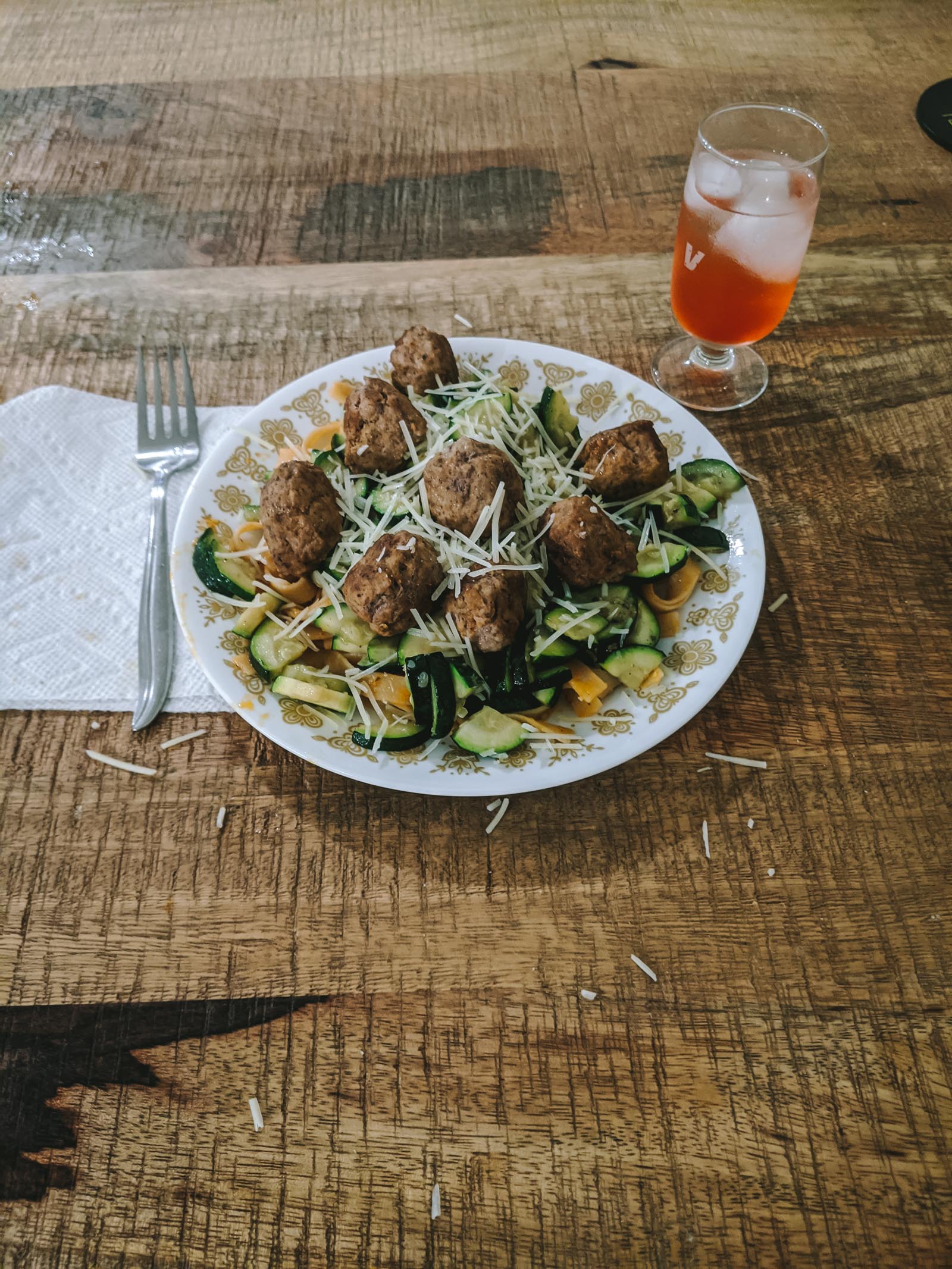 Another clear example of the formula, and also super easy to swap out the meatballs for shrimp or chicken!

Looking for a way to make your meals taste great? See my post on how to use spices! 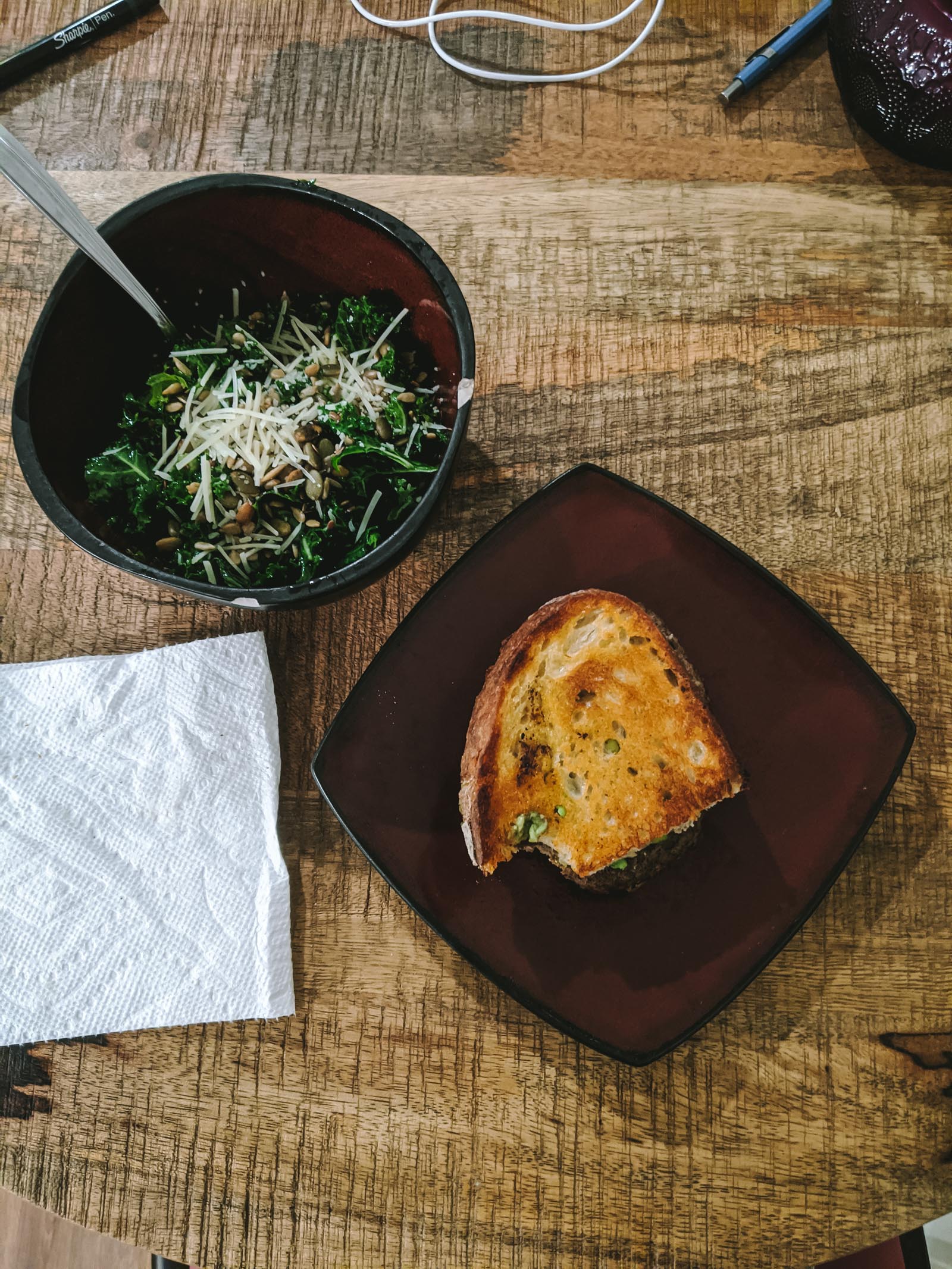 This one might be less clear at first, but a closer look shows us that a burger CAN be part of a healthy meal — just be sure to add in a veggie!

(Hot tip: a side salad is one of the easiest ways to add in a veg in a pinch) 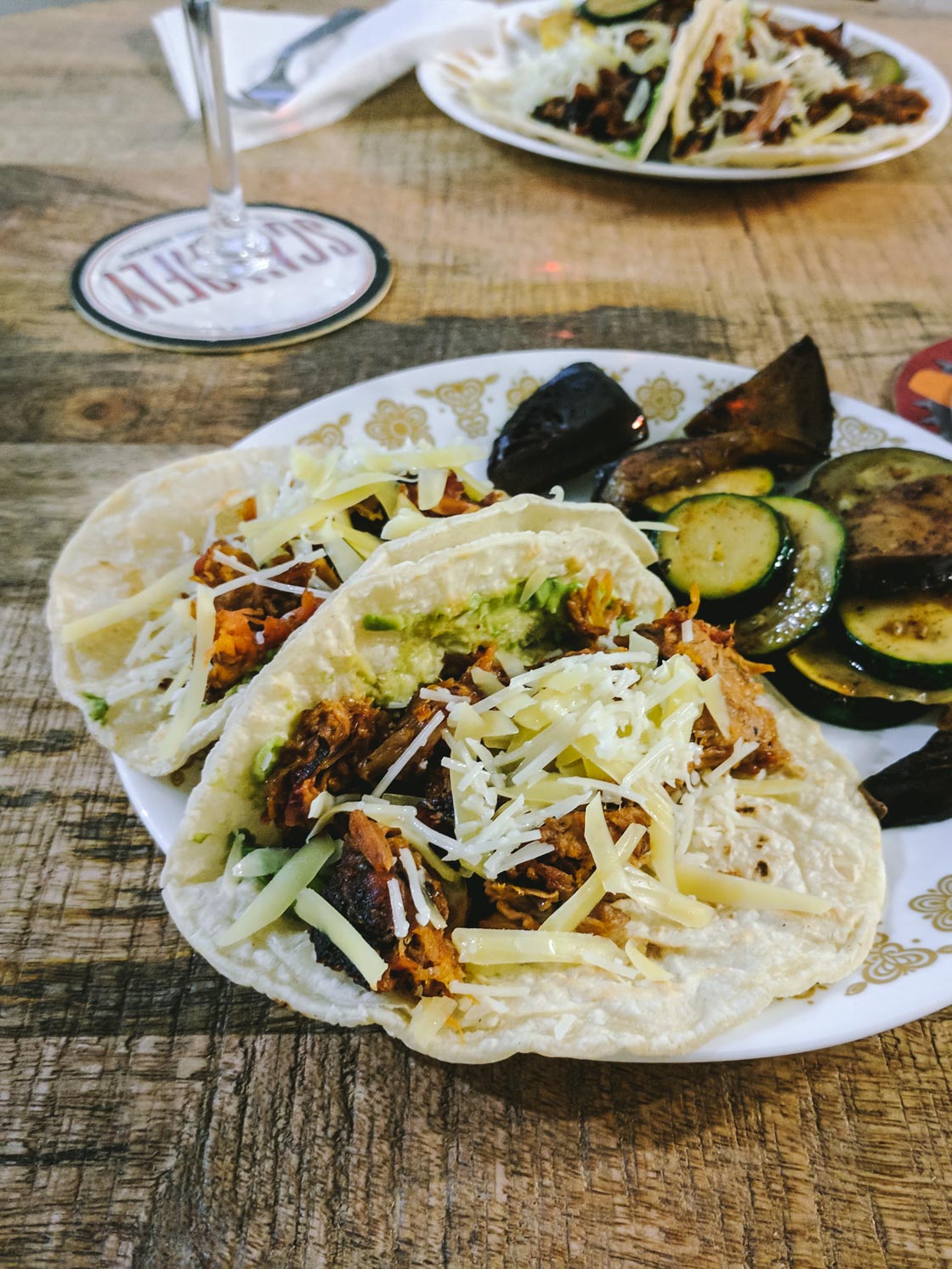 Incidentally, a ton of my entree recipes here also follow the formula.

Tacos: Pork is protein (can easily be swapped for shrimp or whatever), avocado and cheese are fat, tortillas are carbs, and zucchini is veg. Corn tortillas are light on the carbs, so adding in some chips + guac or salsa actually helps balance the meal in this case!

Lasagna: Ground meat is protein, noodles are carbs, zucchini is veg, and cheese is fat.

Crockpot braise: stew meat is protein, potatoes / squash / tomatillos etc. are veggies (obvs). This is clearly light on the carb and fat on its own, so I typically eat with a slice of bread and top with cheese. Or you could top with chips and avocado!

Hopefully you’re starting to see repeating patterns here! Once you get the hang of it, you can see how easy it is to combine the same basic things into endless meals.

Wondering about portion sizes? I love Precision Nutrition’s calculator — they make it simple by using things like your palm, fist, and thumb to measure protein, vegetable, and fat servings.

Yeah it’s nice to make your own food and all, but let’s be realistic: that’s not always possible. Lucky for you, the same formula can be applied when choosing what to get when eating out! Here’s some of my typical meals. 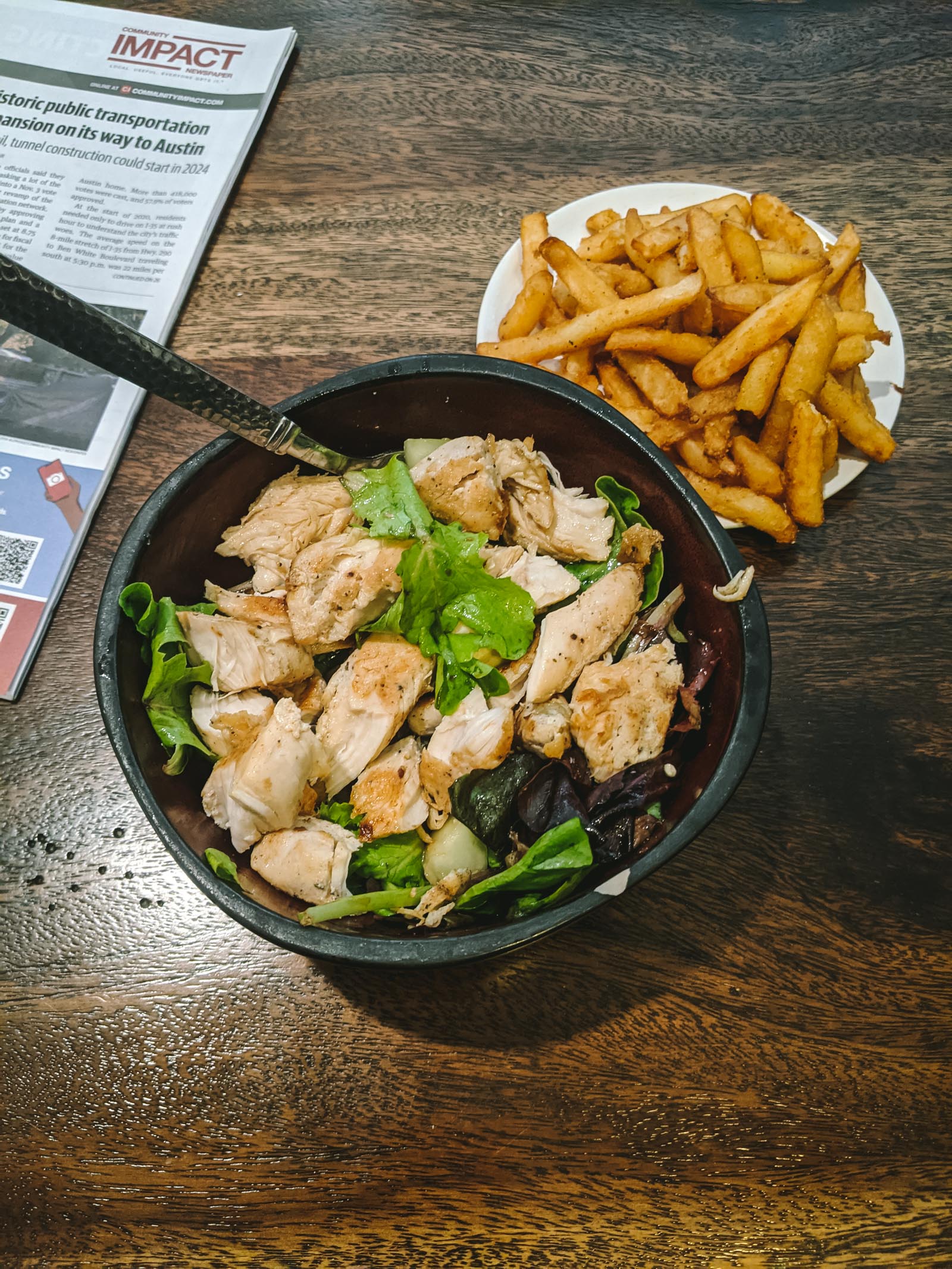 Yes, I really am saying that french fries can be part of a balanced meal. I’m NOT saying you should eat them all the time, but they’re also definitely not “bad.” You just need to know that they’re high in carbs and fat, and be sure to eat plenty of protein and veggies! 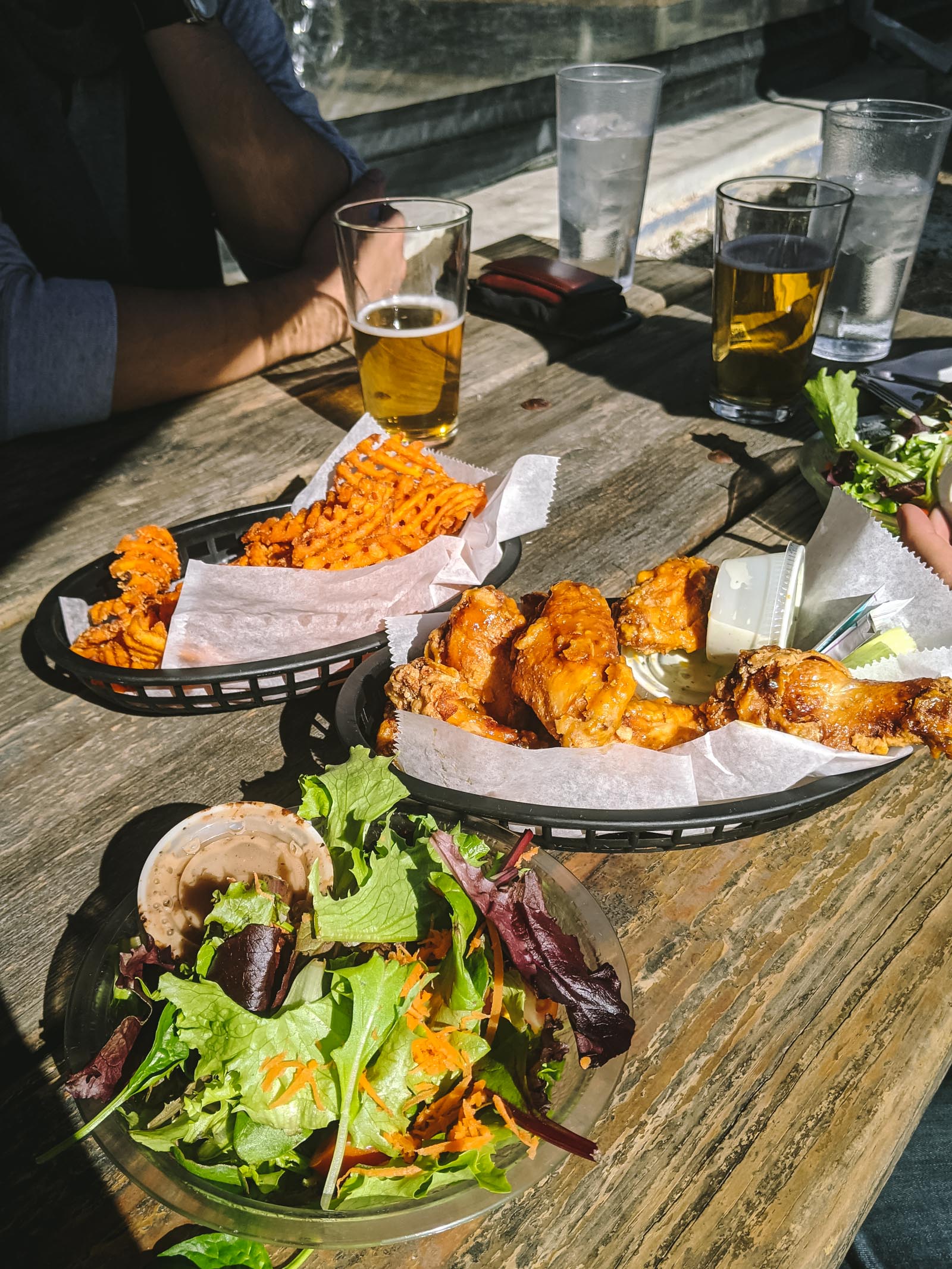 This is a great example of how you can pull together a bunch of things from a menu to create your own balanced meal. Again, not something I’d eat every day of the week, but it’s all about balance!

You know the deal: rules are meant to be broken. Once you know the basics, you can get creative with limited options or yes, even decide to break the rules (but at least you know now what you’re doing)! 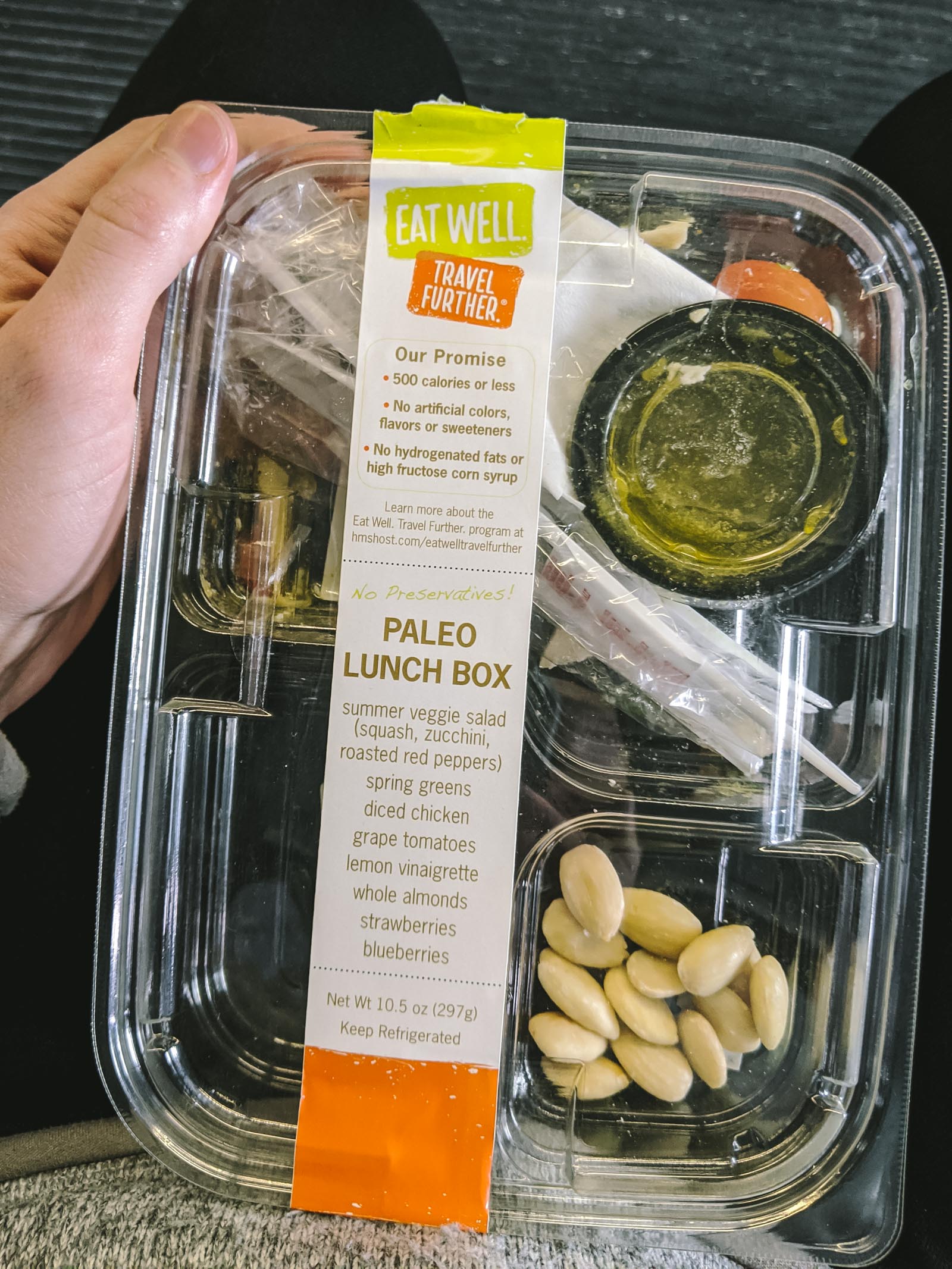 An airport meal (chicken for protein, a good variety of fruit and veg, almonds for fat. This was light on carbs so I probably also got a bag of chips.)

Ah, airports. The site of lots of limited food options (this was pre-Covid times, RIP). This was a decent find — airport meals can be sad (which is probably why I took this picture honestly), but it is possible to find balanced and healthy options if you know what to look for. 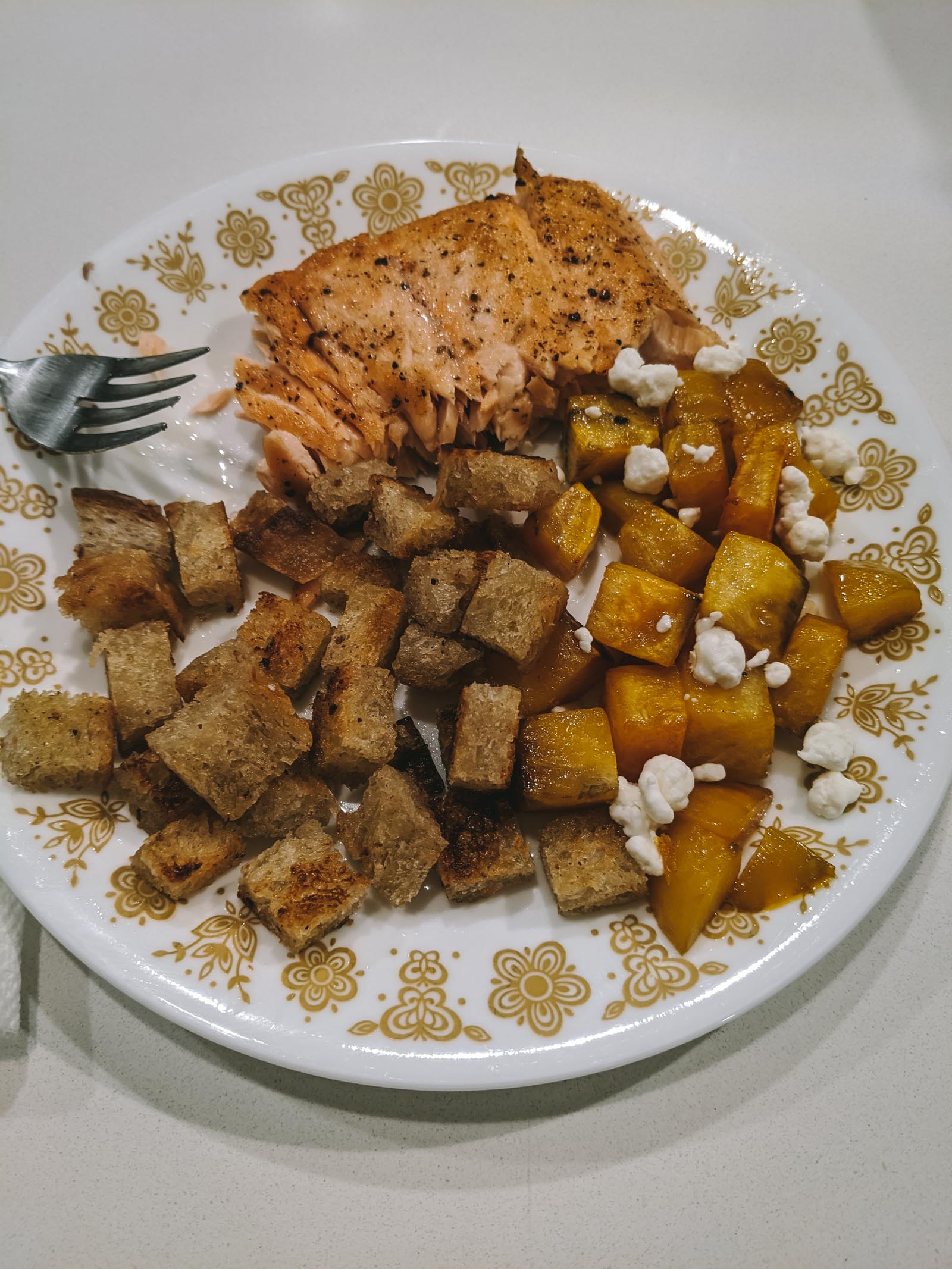 Lol. This was definitely a “we have no food in the house” meal. Croutons are a side, right? 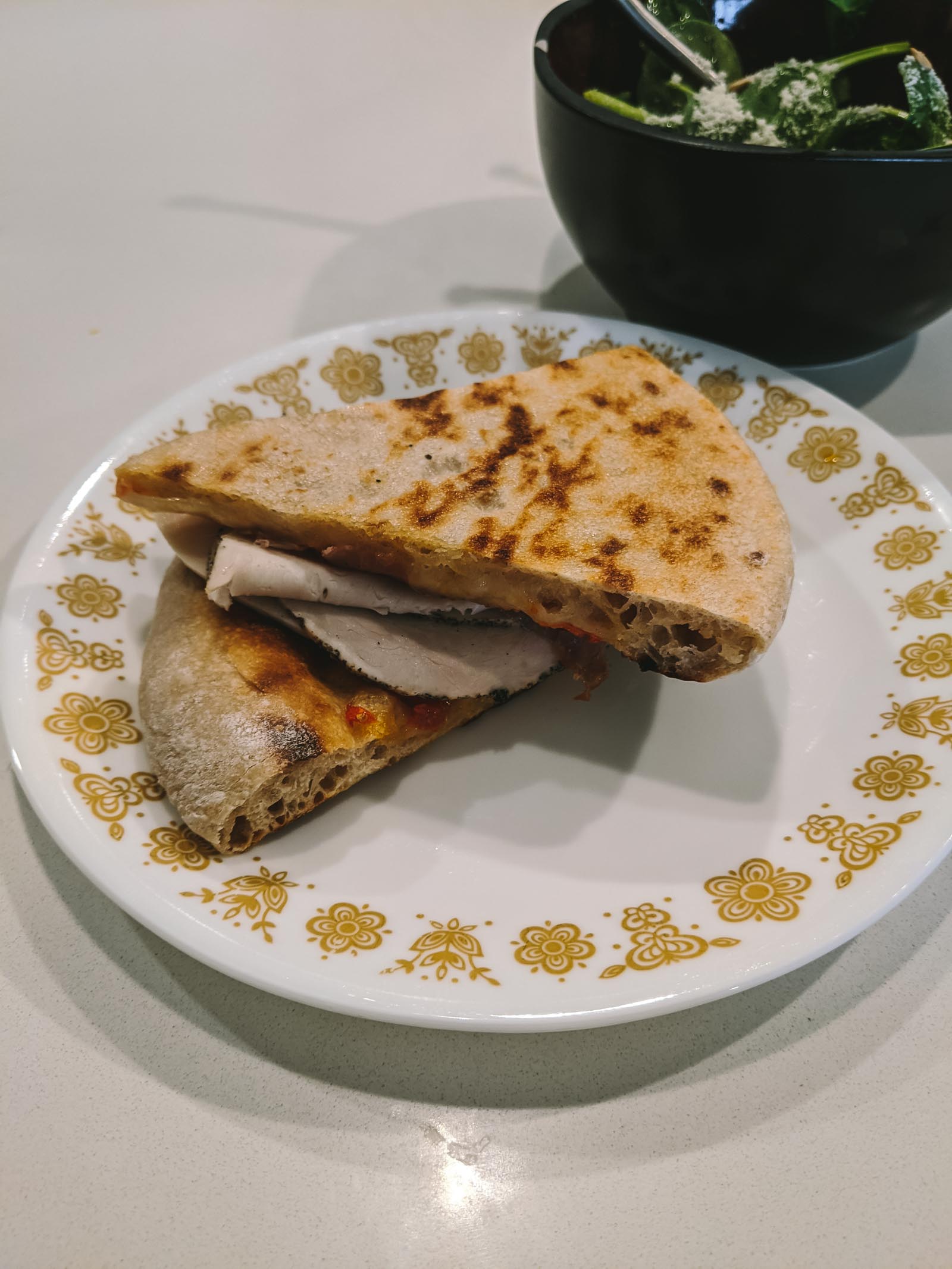 The Pizza-Wich (deli turkey is protein, pizza dough is carb, and pepperoni and oil toppings are fat) + salad (veg)

Pizza, one of my great loves, is basically all carb and fat. Sometimes I eat some deli turkey separately or drink a protein shake on pizza nights. Sometimes (especially with leftovers) I make a “pizza-wich” with deli turkey. And sometimes, I decide I don’t care. 🤷‍♀️

Bonus question: can you identify what’s what in the featured image at the top of the post?

And there you have it! I really hope this formula helps making meal choices easier, and that you learned something! Happy to answer any questions below, and don’t forget to stay messy! 💙 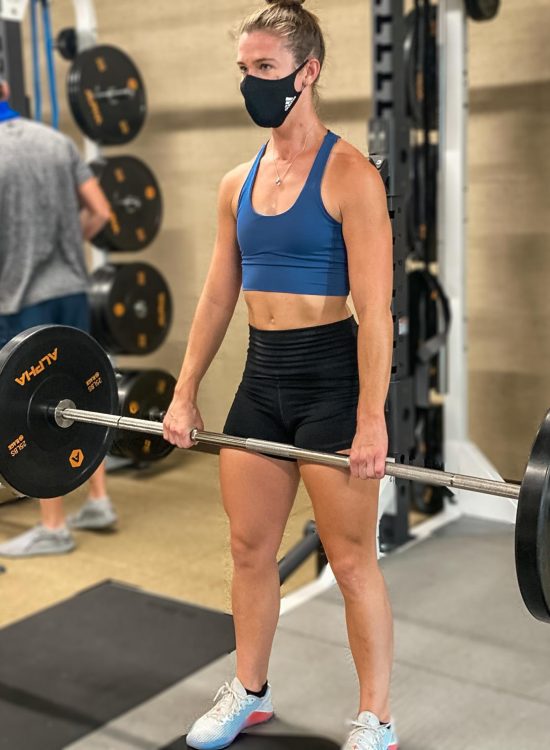 Maybe you don’t need to lose weight next year

'Tis the season... for new years' resolutions to lose weight, eat better, and/or get in shape. And for good reason — I know I'm feeling gross and bloated from a week or two of eating waaay more sugar and drinking... 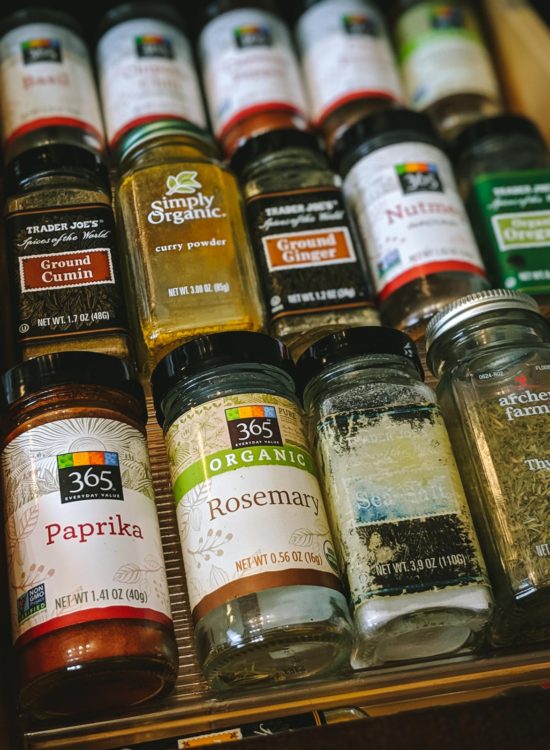 How to use spices

Back to the basics today – consider this post a “spices 101” course. I’ll be covering what spices I always keep on hand, how to get started experimenting with seasonings you might have been intimidated by before, and some templates of combinations I like to use… 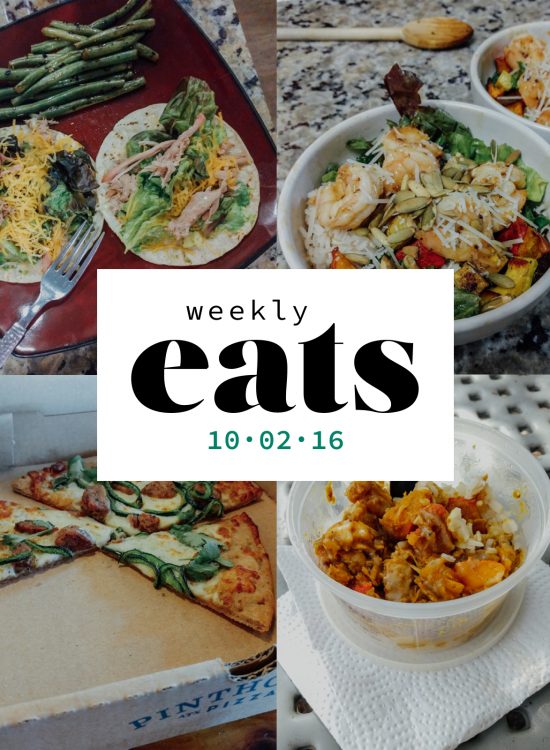 Hey! We’re back with more weekly eats. This week was more successful in the grocery shopping and not eating out all the time category, hooray! Life in general has been closer to the “normal” level of chaos, which is always nice. I was also much more successful at taking pictures this time around. Turns out setting really annoying reminders does the trick…